That might be a bold statement, and there will be a lot of people that say otherwise. But of all of drives that I have every taken, none really compare with a drive through Jackson Hole, Wyoming. The crown jewel of the area is Grand Teton National Park, a park that offers breathtaking views seemingly around every corner. The area also is home to the National Elk Refuge, which is almost 25,000 acres of land set aside to protect a very large heard of elk and other native wildlife. Jackson, the town which the area gets its name is located just to the south of the parks and provides a great starting (or ending) point for your trip.

My trip starts at the southern entrance of Yellowstone National Park, as the two parks are so close that it is used as an entrance for both Yellowstone and Grand Teton. As you come down off the Continental Divide, the Snake River rises and runs parallel with the road allowing many places to pull over and get some photo ops. After a relatively short drive, Jackson Lake comes into view, and along with it, your first glimpse of the mountain range that the park is named after. Jackson Lake is a rather large lake that was cut out by glaciers during the last ice age and provides the perfect reflection pool for the towering spires of granite. Follow the road until you come to Oxbow Bend Turnout where you can get a great reflection shot of Mount Moran. The Snake River bends around just at the right spot to frame the huge mountain at the right place. The hill sides are full of aspen trees, so if you happen to come through the area in the autumn season, that is a wonderful bonus to take advantage of. Once you leave Oxbow Bend, you will need to double back a mile or so to get on Teton Park Road, which is the major artery of the park. 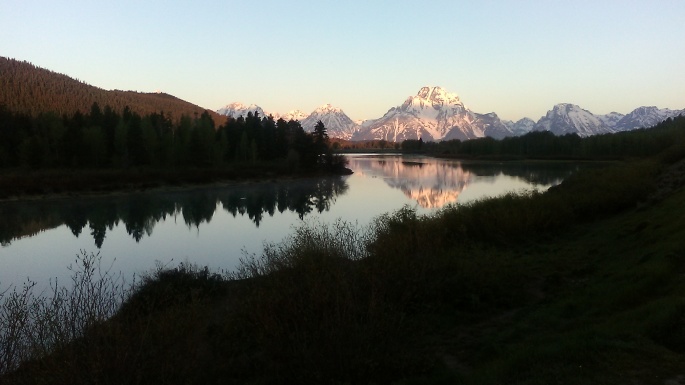 Once you go over Jackson Lake Dam, the first major side trip is to the top of Signal Mountain. At a short drive to the top, you are rewarded with a panoramic view of the entire valley and the Tetons themselves. Depending on the time of day can really change the look of the valley. In the morning sun, the mountains have an orange tint to them, but in the early evening, the sun has gone past the mountains and their faces are in the shadows. You almost have to see the park twice to really appreciate the changes. Once you come down off of Signal Mountain, the next area I went through was the Jenny Lake area. Jenny Lake is what you think of when you picture a peaceful mountain lake. It sets very close to the mountain range and is completely surrounded be mature pine trees. Also, the viewing areas tend to center the lake on Grand Teton itself. I was there in the late afternoon so there wasn’t an opportunity for any reflections of the mountain, but the sun really made the lake sparkle and shine.

If you are feeling ambitious, the lake also has a wonderful trail the circles the lake. There is little elevation change on the trail, but it is a little over seven miles long, so you will want to plan accordingly. Another very popular activity in the park is biking. The National Park Service did a wonderful job of putting in dozens of bike tracks for people to enjoy. Teton Park Road connects back to the highway at the Moose intersection which also where the park headquarters are located. You will usually see rafting groups meeting up here for float trips (more on that in a little bit).

There are other stops that should be made, but are back on the main highway which is more to the east. Snake River Overlook gives the most complete view of everything the park has going. With the mountain lurking in the distance, the Snake River winds its way below among the pine trees. Just a few miles done the highway, another place that should be seen is the historic Cunningham Cabin, which was built in the late nineteenth century as a homestead for John Cunningham.

Now just when I thought I had my fill of how to take in the sights, I discovered another way, by boat. There are many companies that offer float trips through the park on the Snake River. The great thing about this is that the pace is a lot slower, there are no crowds or traffic to deal with, and someone else is doing the driving for you. While on the river, the elk, moose, and deer just come right to the bank and are easy to spot. Also, if you are a bird watcher, there are many different kinds of birds that nest in and around the river. The company I went with charged $70 for a two-hour trip down the river, and I feel like I got my money’s worth.

So, with all of this activity going on, I was glad to have such a convenient location for a base of operations. Jackson, is just a couple miles to the south from the edge of the park and provides a nice selection of services and activities. Since it is a hotspot for tourists, you are going to see the normal stores that cater to the out-of-towners. There is no shortage of t-shirt shops, jewelry stores, and art galleries. I’m sure they are all very nice, but I have to admit, I did not see firsthand. I instead looked for a place to kick back and unwind, and I found just that at Snake River Brewery. Everyone from my rafting guide, to the girl at the front desk of the hotel, and even the man working at the gas station said that it was the place for a cold beer and some good food. And they were right! The beer was fresh and the food was excellent. If you go there, get “The Roper”. Your cardiologist will thank me later! Afterward, there was nothing left to do, but go back to the hotel and settle in for the evening.